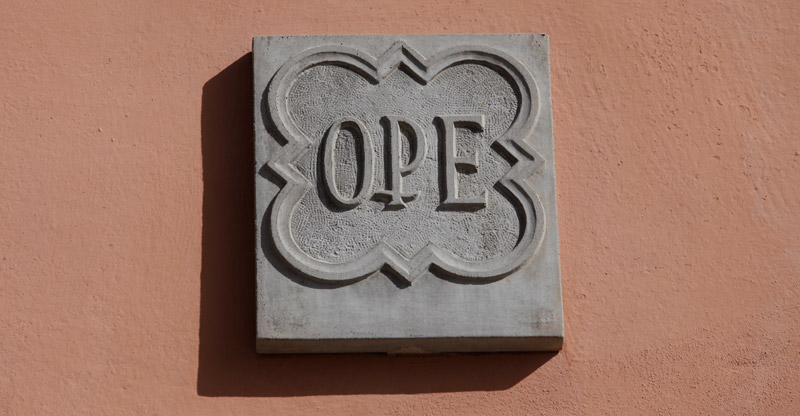 Article 1
The Opera della Primaziale Pisana, the Vestry Board of the Cathedral of Pisa, based in Piazza del Duomo at no. 17, has a legal status as attested by a deed released by the Ministry of the Interior on November 24th 1987. It pursues only social solidarity purposes, in the following areas:
a) Protection, defence, preservation and maintenance, as well as promotion of the image and enhancement, without interfering in church services, of the Cathedral, the Baptistery, the Bell Tower, the Monumental Cemetery, the Bishop’s Palace, the Church of San Ranierino, the Museums and all their appurtenances, subject to the restriction under Act 1089 dated June 1st 1939, by taking care, in particular:

1) of the administration, maintenance, conservation and restoration of the properties and temporary assets relating to the above mentioned historical sites;

2) of the purchase and maintenance of the vestments, altar cloth and holy vessels, furnishings and equipment as needed for the church, the attached sacristy and the other monuments, and any other expenditure, incurred for or serving as a means to carry out the above activities, which is to be borne by the Opera under the Charter.

b) of the promotion of the knowledge of the history and art, in all their forms and cultural expressions, of the monumental group and its appurtenances.
In addition, the Opera takes care, without any interference with Church Services:

c) of the administration, expenditure and maintenance of the property for the costs of officiation and Worship that are to be borne by the Opera under the Charter and that are not included among the properties subject to Act no. 1089/ 1939, as well as the allocation of the associated revenues;

The Opera is represented by a Head Operaio.

The Opera is in charge of carrying out the institutional activities under Article 1 using the following financial means:
Government securities and securities of Italian and European public bodies, Italian and European bonds and bond investment funds;
level and property rents and proceeds from property conveyances, proceeds from national debt;
proceeds from real estate;
rendite del patrimonio immobiliare;
proceeds from the entrance fees of the monuments and any other place which charges an entrance fee;
State allowances;
State voluntary contributions, other bodies and private persons, gifts and donations given to the Opera for whatever reason;
rights of reproduction in any form of the heritage run by the Opera;
any other revenues.

The Opera is run by a Deputation (Board of Directors) composed of seven members selected among fellow townspeople of exemplary morals, excellent conduct who profess the Catholic religion; they are appointed for a three years’ period, two by the Diocesan Ordinary and five by the Ministry of the Interior in consultation with the Diocesan Ordinary. After such appointment, the Head Operaio, in accordance with the traditional relations with the city community, informs the Lord Mayor of the City of such appointment.
No one having a relation of interest with the Opera della Primaziale, either by oneself or through one’s spouse or relations or relatives-in-law up to the fourth degree, can be appointed member of the Deputation.
No spouses or relations or relatives-in-law up to the third degree can be appointed as members of one Deputation at the same time.
Should any member of the Deputation lose his/her office due to resignation or death or inability to serve his/her functions, the Authority that had appointed him/her shall appoint a successor, who will remain in office for the remaining part of the predecessor’s term.

The Head Operaio and the members of the Deputation remain in office three years and can be re-elected. Such office is purely honorary, and therefore they receive no compensation. The expenses incurred in relation to their office can be reimbursed.

The Secretary of the Opera presides over the correct running of the administrative services and is personally responsible for book-keeping and for the regularity of accounts; is in charge of collecting revenues, recording income and expenditure entries in the relevant books, drawing up the inventory of movables and immovable property and keeping the records; the Secretary makes the payments according to the obligations undertaken under the official provisions of the Administration; presides over and takes care of, by giving relevant directions, the regular enforcement of the resolutions passed by the Deputation and the security and cash services, in accordance with the provisions set forth by the attendant Regulations; draws up the proceedings of the Deputation meetings and signs them along with the Head Operaio.

The legal status, the compensations and the retirement pensions of the employees of the Opera are subject to specific Regulations that also cover the organisations of services.

The financial year lasts one year and coincides with the calendar year. The Treasury or cash service is carried out, under a special agreement, by a bank of well-known soundness selected by the Deputation. The Secretary shall timely pay, in the ways described by the Regulations, into the bank account open at the bank acting as the Treasury or cash service the money collected for whatever reason on behalf of the Opera. Payment and collection orders are signed by the Head of the Accounting Department, the Secretary and the Head Operaio. Accounts related to the institutional activities and any related activity covered by the regulations under Act 460 dated December 4th 1997 are recorded separately from the other activities carried out by the Opera which are not covered by such regulations. Accounting obligations are fulfilled by keeping a Journal and an Inventory Book, pursuant to articles 2216 and 2217 of the Civil Code. The budget and the balance sheet are drawn up according to the model and contents of such accounting principle.

The Deputation carries out those activities that go beyond the ordinary business, in consultation with the Diocesan Ordinary.

The Deputation and the Head Operaio may not distribute, either directly or indirectly, any income or surplus resulting from the activity of the Opera, nor any fund, reserve or capital, during the life of the organisation, within the limits of the law.
Any income or surplus resulting from the institutional activities or activities directly associated with them, as per Act 460 dated December 4th 1997, can only be used for the accomplishment of such activities.

In connection with the accomplishment of the institutional activities and any activity associated with them other than those set forth by the above Act no. 460/1997, the Deputation uses the revenues of the Opera in the following forms: government securities or securities of Italian or European public bodies, Italian and European bonds, bond investment funds; purchase of property, subject to prescribed authorisations; interest-bearing deposits in banks or post offices.

The movables and immovable property owned or run by the Opera are listed in special inventories in duplicate, which must be kept updated at all times.

Under no circumstances and for no reasons can the works of art owned by the Opera and recorded in the inventories be alienated.
Under special circumstances, the Deputation can allow works of art, relics and documents owned by the Opera to be temporarily on display in national or diocesan museums or national and international exhibitions, establishing adequate guarantees as needed. In addition, the Opera can decide that the items and furnishings which are or will be used for Worship be exhibited in the Cathedral or in the Museo dell’Opera, in the custody and on the responsibility of specially-appointed staff.

Any works to be made at the monumental buildings and artistically relevant works shall comply with the regulations on the protection and conservation of monumental works and assets of artistic or historical interest, according to the applicable Laws. Whenever it deems it necessary, the Deputation can use one or more qualified, specially-experienced consultants, as free-lance professionals or employees, for the study of some particular project or for the supervision of the works for the maintenance and restoration of the monuments or for professional historical or artistic advice.

The staff in charge of the Church Services shall be hired by direct name call, by resolution of the Deputation on the consistent suggestion of the Right Reverend Chapter of the Primatial Church of Pisa, in consultation with the Diocesan Ordinary.

The music and choral services are provided by the Cappella Musicale (Choir) and the “Schola Cantorum” which are headed by a conductor and music master, appointed in agreement with the Diocesan Ordinary and confirmed year after year, whose tasks and remuneration are as set forth in the Staff Regulations.

The Opera can allocate yearly contributions to the Diocesan Ordinary for the needs of the Church, according to tradition and within the limits and with the methods resulting from tradition.

Should the Opera be abolished for whatever reason, its assets shall be donated to some Ecclesiastical Body, in consultation with the Diocesan Ordinary and the Board of Control , pursuant to article 3 paragraph 190 Act 662 dated December 23rd 1996.

For anything that is not covered by this Charter, the regulations laid down by Act 222 dated May 20th 1985 and PD 33 dated February 13th 1987 and any provisions therein referred to shall apply.